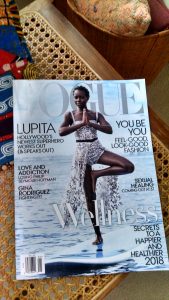 If all publicity is good publicity, then Yoga Journal has nothing to worry about.

They caught shade last fall over their Jessamyn Stanley cover. The yoga community was thrilled so see our self-described “fat femme” sister on the cover — and then crushed and angry to learn that she was only on half of the covers. (The other version had a thin, bendy white woman in an elaborate yoga pose.) YJ was called out so loudly in social media that the next two covers didn’t have faces at all.

This was after they put Chicago yogi Marshawn Feltus on the cover. I was elated to see a brother on a YJ cover.  They didn’t bother to photograph him in a studio as they normally do. Instead he was poorly lit, wearing a hoodie, standing with his hands in Anjali mudra instead of in a full asana. It might as well have been shot on someone’s phone.

The latest gaffe:  They sent out an Instagram poll asking followers to decided who they’d rather see on the cover—a black woman or a white woman. The yoga community flipped. I’ve been a magazine editor for a long time, so I can assure you that reader polls, cover testing and even split covers are common. But this isn’t how it’s done.

Bless their hearts, I guess they’re trying. When people complained that the magazine only reflected the thin, white, female yoga stereotype, they started to include more models and pictures of people who are non-white, gray-haired, thick-thighed, or of obviously different body circumstances.

But it’s obvious when “diversity” is a paste-over job versus when it’s engrained. True diversity runs deep and wide—throughout the staff, the leadership, the behind-the-scenes people—before it makes a public face. An organization that is serious about inclusion makes sure decisions thoughtfully reflect the concerns of people from a range of experiences and perspectives. It takes some effort, but it’s not that hard.

Unfortunately, for some organizations, diversity is just a thin veneer. They hire a brown person (or queer person or wheelchair user or whatever difference meets their needs), but don’t give them a voice or power to actually make change. I’ve also seen a situation where a person was hired, given the power and actually accomplished diversity goals—but then the powers that be got uncomfortable with it and started to back pedal. That person soon moved on.

Representation matters. But leadership matters more. At least it does if your commitment to inclusion is sincere. When you start putting people who are aware/conscious/woke—through experience or conscientious training—into leadership positions, you start to see a real difference in the culture of an organization from the ground up. What’s obvious from the fact that YJ is making gaffe after gaffe is that there is no one in leadership who has the adequate cultural awareness to address diversity concerns there.

As Black yogis, we may find ourselves called on to represent “diversity” in organizations that are trying to do better. We have a responsibility, too: We have to remember that our role is not just to be a face, but to speak with the voice and the heart of our community. We have to stand firm for our people and speak. Yoga organizations and publication like Yoga Journal have to listen, learn and heed.

• • •
Since completing yoga teacher training in 2013, Tamara has been teaching yoga at Bennett College, the historically Black women’s college in North Carolina where she also does research and writing about yoga and health. She recently joined the team at Rise & Flow yoga as an instructor. @tamjeffries

On the Journey to Enough

“You are enough. You are so enough. It is unbelievable how enough you are.” — Quote from Mary Setrakian made famous by Sierra Boggess In

For the First Time, I Was Not the Only One

Last Spring 2019, I was invited by a friend to join her for an “urban yoga” class and vegan brunch in Tampa, Florida.  I was

While grocery shopping one day, I struck up a conversation with a woman who complained of back pain and spine compression. I invited her to

A Path to Something Greater

By some quirk of fate, 50 years ago, I stumbled across a yoga class being offered at my local art museum. (There were no yoga