On August 27, jazz musician Alice Coltrane would have been 82 years old. She was a light in the music world but in the yoga world as well. 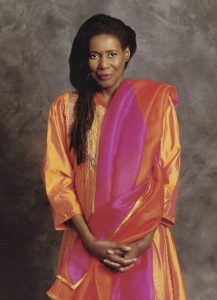 For many young people, Alice Coltrane is an unfamiliar name. Those who have heard of her know her as the wife of iconic saxophonist John Coltrane.  Though she was a gifted multi-instrumentalist (she played piano, organ and harp), she’s one of only handful of women who made her name playing—not singing—in the male-dominated jazz milieu in the 50s and early 60s. Her star might have faded after John died. Instead, she kindled another kind of light and created a path for herself as a leader in the yoga community.

MUSIC IN HER VEINS

Alice McLeod was something of a musical prodigy, playing piano in Detroit’s Black churches as a teen, and in the Motor City’s thriving music community as a young woman. It was her talents as a jazz musician that brought her into contact with John Coltrane in 1963. And it was John who introduced her to Eastern philosophy, including yoga.

He had studied Hindu mysticism, read the works of Yogananda and Krishnamurti, and engaged in daily meditation—practices he shared with Alice.  He also believed that music was a powerful healing tool; he envisioned having a spiritual center where music would bring people together across faiths. Alice was devoted to him and to his ideas.

When John died, he and Alice had been together only four years. She was left with her grief, four young children—and his unfinished legacy.  For a while after his transition, Alice recorded an album every year. But she eventually fell deeper in an intense period of asceticism—tapasya—retreating from her family and friends, not eating, sleeping, or performing. She describes this as a phase of “divine, complete, uninterrupted God-consciousness.” But her weight dropped dangerously. Her behavior was erratic. Her children were left to the care of “angels.” Friends and family were worried.

It was bassist Vishnu Wood who took her to meet Swami Satchidananda, hoping to lift her out of this frightening state. For Alice, meeting the “Woodstock guru” was the beginning of a new personal, spiritual and musical trajectory.

By the 1970s, when many of our present-day yoga leaders had just begun practicing, Alice had already traveled to India with Satchidananda and to play and learn about eastern music.  She studied Indian and yogic spiritual concepts and philosophies, eventually being called to spiritual leadership and transforming her identity to Swamini Turiyasangitananda

She moved to northern California and founded a Vedantic study center; later built an ashram on 50 acres in the mountains near Santa Monica.  From the Sai Ananta ashram, she lived as a spiritual guide and healer for a community of some 100 people—many Black and Brown practitioners of Hindu ritual and yoga.

Sharing sacred sound with her followers became the focus of her music. Followers heard her musicianshipin the daily bhajans (chants) and lifted their voices with hers during the Sunday satsangs (worship service). “Chanting is a healing force for good in our world,” she said.

If she could expose people to the sound of God—wrapping them in it with her voice and instruments—she believed that they could be healed. In this way, she was carrying out John’s vision. But she had stepped into her own power as well.  In addition to leading her spiritual community, she was active as a healer. Devotees came to her for prayers, mantras, or “laying on of hands.” Some say she could heal an ailment with a simple gesture in your direction.

Alice Coltrane’s yoga path had powerful men as lightposts–John, Sri Satchidananda, and, later, Satya Sai Baba. And while she honored their influence, she took her own path. Even her spiritual name, Swamini Turiyasangitananda, was a divine revelation, not a guru’s gift.

Swamini Alice Coltrane-Turiyasangitananda redefined yogic practice in her own image as an African-American woman. She included Black music traditions in her teaching, cultivated a culturally-aware practice that embraced the Indian roots of yoga but attracted people of color who wanted to share the spiritual and healing benefits of community.

Her ability to build and sustain institutions of worship attests to her vision. Her ability to maintain a devoted following attests to her personal power. Her complex and prophetic journey laid a path for the evolution and proliferation of yoga practice in the Black community.

She crossed boundaries, genres and continents. She embodied pain, austerity and creativity. As her son Ravi has said, “Her ability to evoke the spirit and the spiritual never left her.”  She was herself a translinear light.

Creating a Pathway to Yoga for People in Correctional Facilities

I was first introduced to yoga in 2014 when I was training for a half marathon. In addition to the many health benefits that yoga

In many ways, I’ve been front-lining my life the last few years. I’ve been in the trenches of my own being. I’ve charged ahead over

Yin, Yang and the Power of Food

A holistic cooking class helped this author understand the difference between the good life and a meaningful life.  Mom’s African-American mantra for me was, “Get

“My arms are too short,” a frustrated Kalumba tells me as she tries to lift her torso off the ground in Elephant pose. “My boobs